Over at Mycrofilms, we’ve just produced the first video for Kilkenny rockers Von Bizmark. It’s for their ‘London’ single which is currently sale in Tower Records and Heartbeat City outlets around the country.

This was my first time getting to cut my teeth on a music video. I learnt a lot of lessons. For example, it’s hard to get those women in silver hotpants to show up for any old video. And always keep the camera with you on sunny days. Always.

Without the hotpants and car washing scene, we just had to settle for the boys in Von Bizmark rocking out. Another fine editing job from Mr. Alan Slattery. And thanks to the Von Bizmark lads for working up a real sweat. 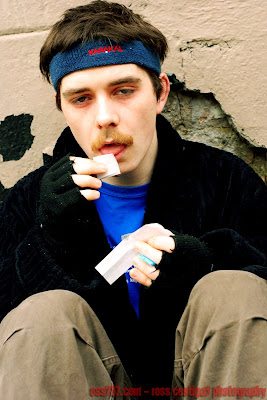 The profile for the fugitive stoner from ‘The Adventure Of The Hidden Microfilm’ has just gone online over at that very page.

Quigley was one of our favourite characters on page. We’d never had anything as exciting as a fugitive to work with and we wanted to flesh him out into something different than what we’d done before. So, yeah, stoner comedy and fart jokes. Voila, there he is. And we liked the idea that a fugitive who initiates a chase episode would in fact be completely brain fried and slow.

Our grand plan was for Quint to be the resident tech nut for V.P.I. Kinda like their equivalent of Q in the James Bond series. Hence, the name. Q central. But we never really got around to loading Quigley up with all the cool homemade implements that we wanted him to design. And he never did get to give V.P.I. cool gadgets to fight the Pinkertons with. But we did manage to get him across as a stoned and paranoid conspiracy theorist. So at least that base was covered. And thanks to Kevin Mooney for keeping that moustache for 3 months. Legend.

Quigley will be making his return in the forthcoming ‘Attack Of The Pinkertons’. There’ll be more announcements on that tres soon. In blog form! In the meantime, enjoying getting to know Quint a little bit better.

Thanks to Ross Costigan for another lovely profile capture in our ever expanding micro universe.

‘The Case Of The Poisoned Dates’ is online

The newest episode of Vultures went online yesterday and it’s free for all viewage at www.VulturesPI.com. Or else you can watch it here!

We’re pretty happy with it I have to say. More and more our intentions and what we want to achieve is actually being realised. So yeah, little by little, it’s getting there. But please do enjoy, I’d love to hear any feedback too.