I came across this little curio online a few weeks back. It’s a clip from the first film I ever made back when I was 17. Made by YIFM in 2001, Skegs and Skangers was my idea of an Irish teen movie set on the weekend before a bunch of Kilkenny youths go back to school. Unfortunately it had no nudity, bongs or anything else remotely interesting. Mostly people getting in fights with scumbags at shit house parties and being embarrassing with girls. So essentially, it was not unlike my actual teen years.

Here’s one scene from it that ended up a bit more finished. It features Mark Colgan, Mick McGrath and Chris Walshe in a shop that no longer exists in Kilkenny:

I can remember none of us had a fucking clue how to make a film and I’m pretty sure the whole thing is nonsensical because there was roughly 30,000 storylines. But it was pretty good hands on experience at the time and I remember it being a lot of fun. The film remains unfinished (or abandoned) and will likely never see the light of day. It had a huge cast that could do with the embarrassment so maybe some more of it may resurface.

I took all the teen characters and moved them on a few years and used them to make another Kilkenny piece, a play called Smitten, which was first performed by Devious Theatre in 2008. A lot of the characters are the same and the story was just as ramshackle. I’ll probably do something with the same characters when they’re in their 30’s as well. 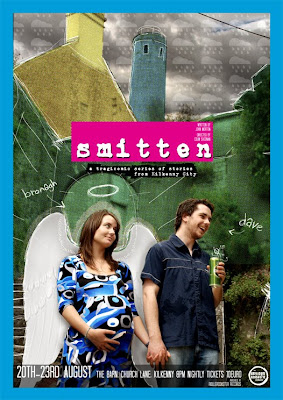 It is very likely that it will involve lots of different stories set in Kilkenny and not make much sense when pieced together.