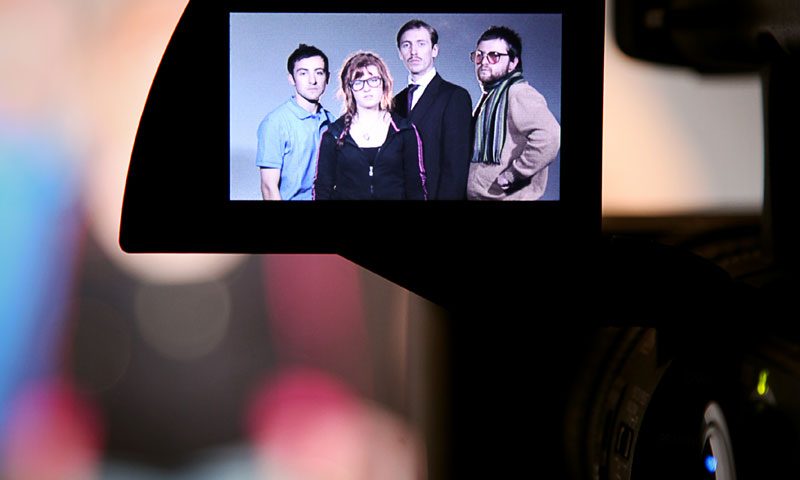 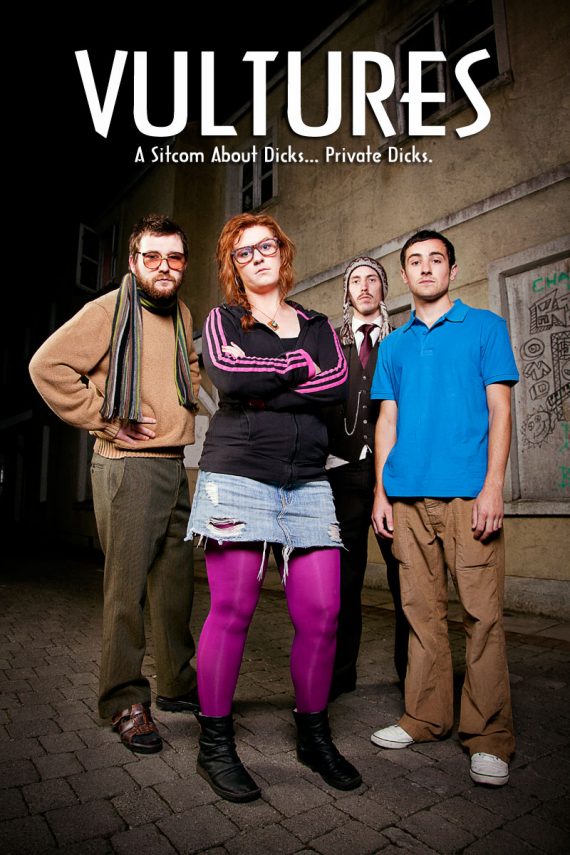 Nearly 3 years since we wrapped filming on our low budget detective webcom Vultures, we announced last week that it’s coming back for a series of new webisodes (like episodes…but on the web…)

So I’m going to write a little bit about why we’ve brought it back and what we’re doing and what to expect. Since we finished the first series in 2009 we’ve been shopping the show around in the hopes of getting it funded/broadcast/commissioned. And it’s just been a really long process. RTÉ weren’t interested. They turned it down in three different formats and told us that it wasn’t ‘broad’ enough and comedy isn’t really their thing. Yup. We should have paid more attention to what Graham Linehan said. We’re going to wear ‘not broad enough for RTÉ’ as a badge of honour. But it hasn’t all been negative. We’ve had some really positive responses and chats with nice people and there’s ongoing interest that we’re trying to sustain.

And sustaining interest explains the return of Vultures. The first series was filmed three years ago so we’re aware that considering the long commissioning process we’re now trying to sell people on older material. So we’ve decided to shoot some new material to freshen up the show.

It’s not a second series though! The process of making anything that took the time and the budget of the first series means that we won’t do anything until we have both time and budget! Which also translates as being less stupid nowadays… less. We wrote a second series that I’m really happy with and we’re still looking for funding. The new episodes, if anything, are like a Series 1.5. Like when Arthur Conan Doyle did all those flashback Sherlock Holmes stories to kill some time and generally be cheap about coming up with new material.

Unlike the long episodes we did in the first series (lesson learned: become your own script editor) these ones are all short and self contained and they bridge the gap between what we did in the first series and the storyline for the second series that we may maybe might make, possibly potentially. You won’t need to have seen the show before to enjoy them. We’ve got four lined up and we’re planning a new Christmas episode to complete the ‘series’ for 2012. The first one is called Janine Drew Presents Where Have All The Good Dicks Gone? and it shoots in Kilkenny this coming weekend (that is absolutely a Bonnie Tyler reference). The episodes will then be released between March and June on iTunes, our YouTube channel and VulturesPI.com. 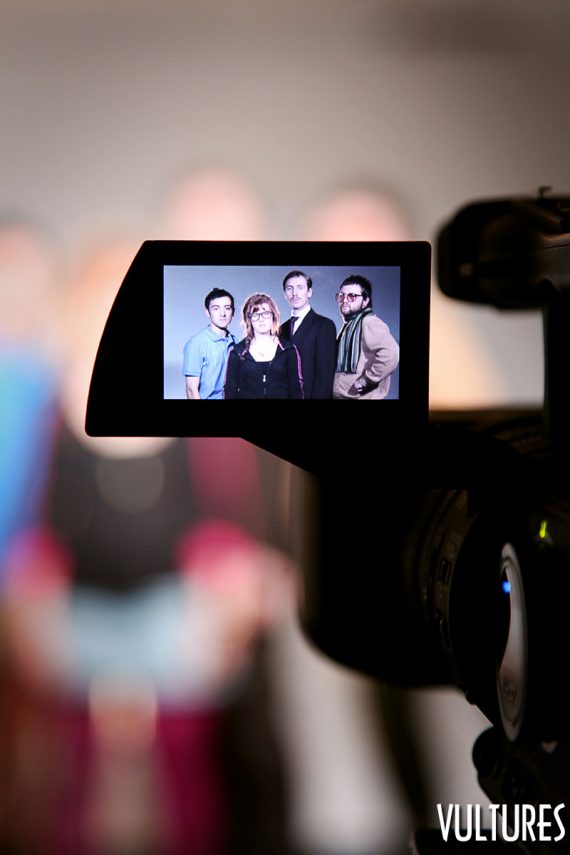 The new material revolves around Tennyson, Vultour and McGrain, the unemployed former detectives of V.P.I. and new addition, college student Janine Drew. We’ve got the cast and crew on board and there’s also a few new faces lined up, so we’re looking forward to getting back into the fun stuff.

The only cast member we needed who we couldn’t nail down was Eddie Brennan who plays Fred Bass. Eddie perpetually has rugby training and all through the first series he would say things like ‘Fuckin’ hurry up, I’ve to go to rugby training.’ When approached about a scene in the new episode, Eddie said ‘I’ve got rugby training that day.’ So yeah, we’re gonna kill Fred Bass off in the first episode. Or maybe just get have him lost at sea. Whatever works. More updates as I have ’em!

The sexy new promos are by Ross Costigan Photography. (Who coincidentally is currently getting ready to wear a new fur coat and pitch his voice up a few octaves) 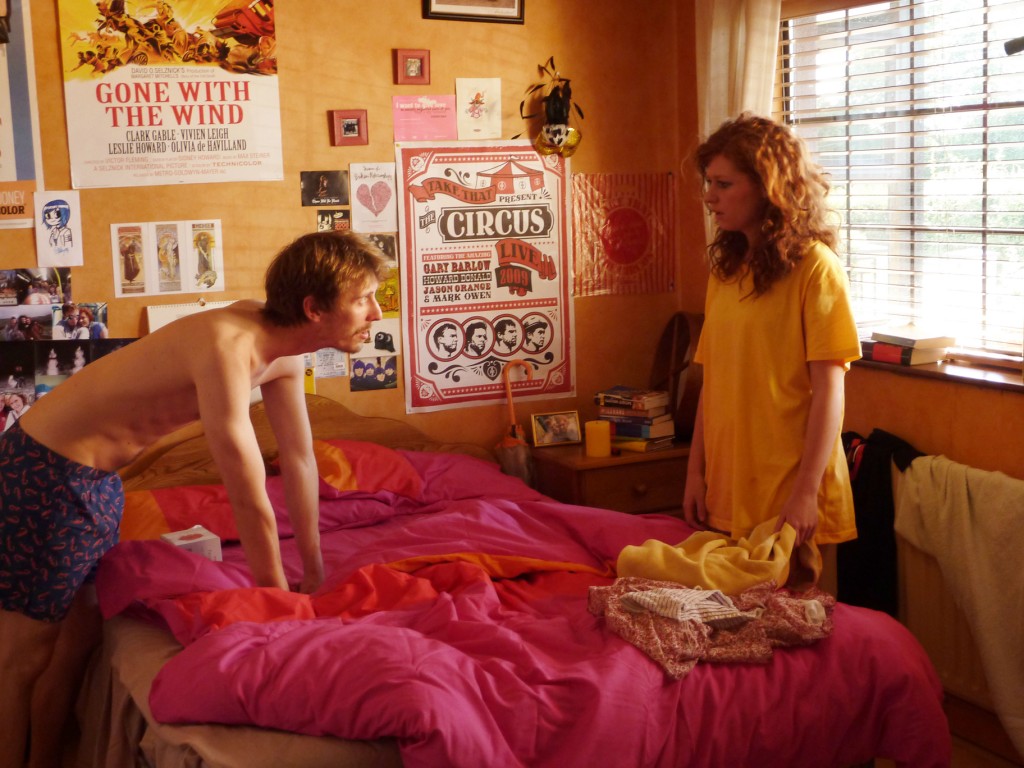 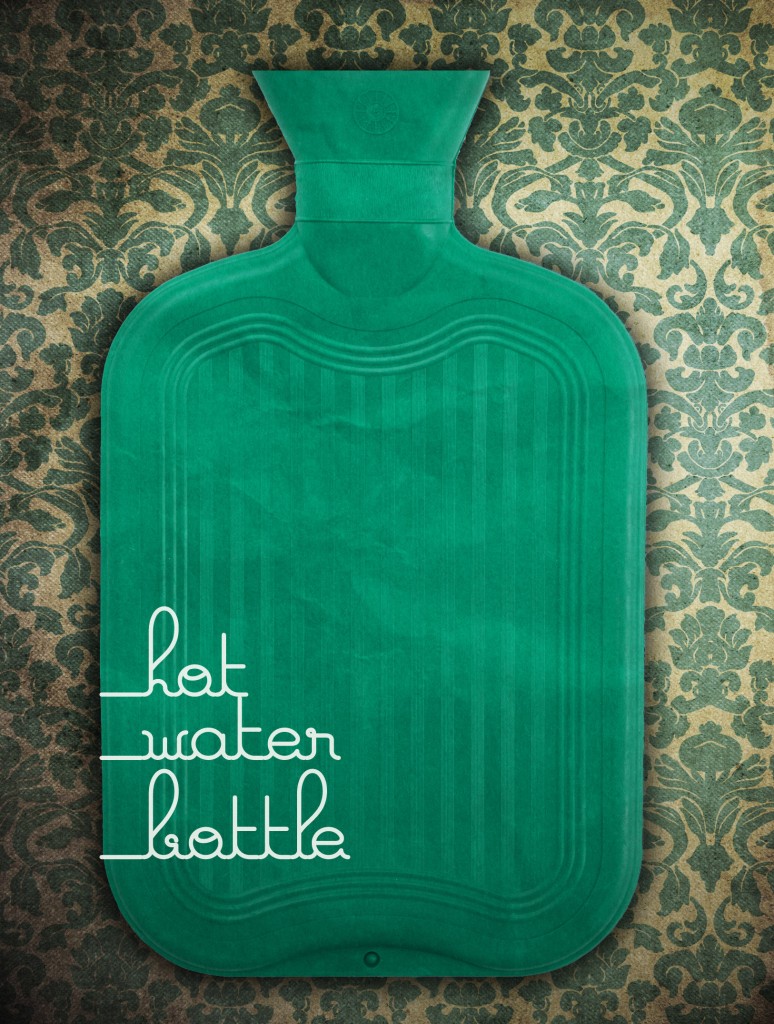 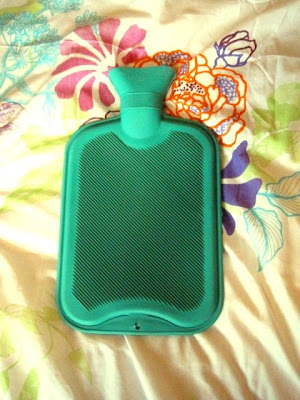 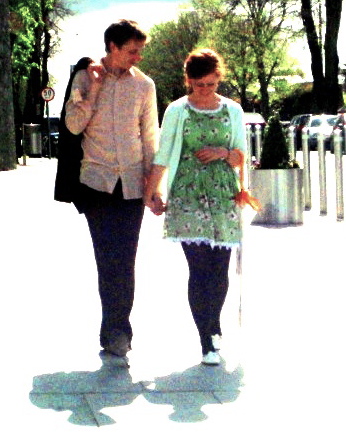 We’ve just got our hands on the title cards for the upcoming Vultures finale. As is usually the case, Paddy Dunne has done another sterling job in representing the episodes in a fine display of design and fancy lettering. 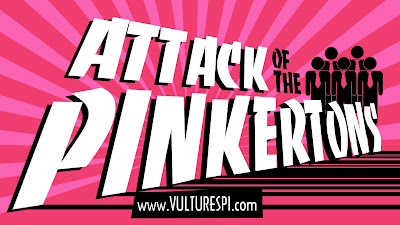 Our idea for the Attack Of The Pinkertons title card was to go a little Manga on the look. And of course, pink. Which is quite befitting of the storyline in which the Pinkertons finally open shop and start their campaign to take over our little unnamed town. Our remit for this episode was to load up on the action and of course, we’re suckers for Manga so we thought it’d be a nice look for what’s shaping up to be our most violently cartoonish episode. 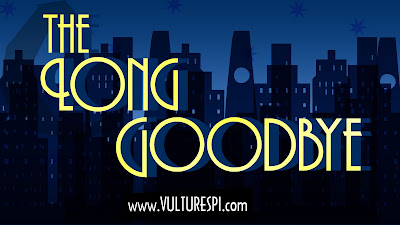 The title card for The Long Goodbye is a little more noirish and does a good job of evoking the sense that this is the final hooray for Vultures. We went a little 40’s noir on this as the episode itself has plenty of smoky bars, subterfuge, femme fatales and indeed, goodbyes.

Attack Of The Pinkertons goes online on Sunday September 20th.
The Long Goodbye will follow 2 weeks later when it brings all matters to an end on Sunday October 4th.

I’ll be posting a few bits and pieces here in the run up but as usuall, all things Vultures can be found over on www.VulturesPI.com

This is the trailer for our upcoming production of Stags and Hens by Willy Russell. Cut to the strains of David Bowie’s classic ‘Modern Love’ it depicts the titular stags and hens engaging with the bathroom mirrors of the same nightclub they inhabit. And as you’ll see they engage with them in completely different ways.

We shot this trailer on the 21st June and it was one of the most fun shoots I’ve ever been part of. We had a blast getting into our costumes and just letting fly in front of the camera. From concept to blocking, we at Devious Theatre developed the entire trailer along the way getting the assistance of Alan Slattery of Mycrofilms in Kilkenny, who shot and edited the trailer under the direction of Kevin Mooney, the man at the helm of the production. We’ve wanted to shoot a trailer for a Devious Theatre production for years and this was our first shot at it. Considering the buzz it’s after generating and the feedback we’ve all been receiving, it’s something we’ll definitely try out again.

Tickets for the show are on sale and available by calling in person to the Watergate Theatre, Kilkenny or by phoning 056-7761674. For group bookings (six and over), please contact ourselves at The Devious Theatre Company by clicking here.