Technically speaking, 2011 is the future. Even though it’s in a couple of days. My plan for this futuristic time is a little project called In The Future When All’s Well. 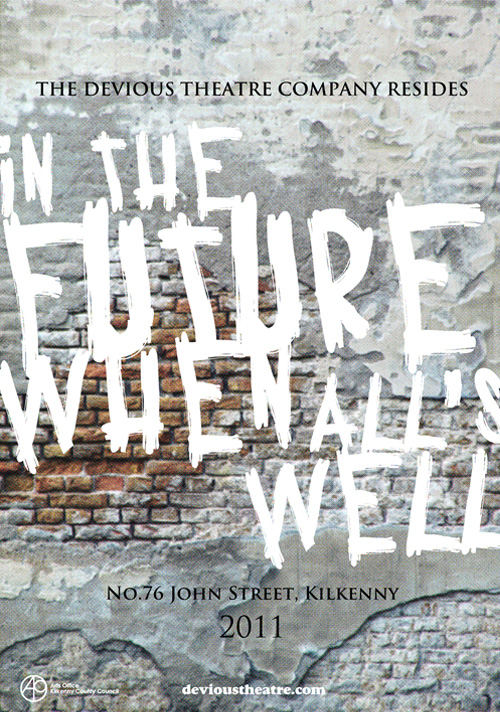 In my role as general theatrical dogsbody for Devious Theatre, I’ll be working with our usual Devious crew and some exciting vibrant new additions to create a 6 month programme of theatre based entirely in the Kilkenny County Council Arts Office.

Mary Butler, the Kilkenny County Council Arts Officer and a lady of extreme go getting, has long being trying to get us into a building of our own. After a couple of thwarted attempts, she’s decided to use their long standing Artist In Residency programme to bring in an entire theatre company. So we were pretty damn chuffed and have spent the latter half of 2010 putting our brand new season together. The vibrant new additions to our team will function in a way that I imagine the new Ghostbusters movie will play out. With us grizzled veterans training in a group of new Kilkenny ‘Theatrebusters’. Because I’m writing this I can lay claim to being the Venkman, Ken is obviously the Stanz and Paddy is the Spengler. Angela is a sure fire Janine. And I think Eddie is most likely the Zeddmore. We will spend our days standing around planning theatre and sliding down poles in the Arts Office. Here’s what we looked like when we did it in 2007 (Ken took the photo so he’s behind you). 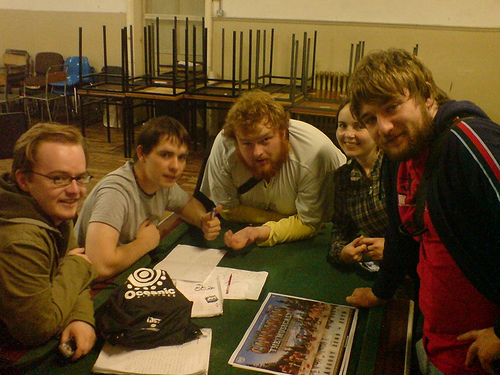 Who Are You Going To Call? Devious Theatre!

I’m not yet in a position to say what the plays are yet but in line with already has been announced, there’s 3 of them. And there will be another one for the radio which Ken is directing and will involve a great big bunch of writers. And there will be lots of other exciting things that will happen I’m sure. The actual announcement of what the plays are will be happening in the next couple of days once the festive season has died down. And they’re all originals. Well, by originals they either haven’t been done before or they haven’t been done before by anyone that isn’t Devious Theatre. My role in the season involves doing a whole bunch of writing, directing and acting which will make my head spin. I am hoping that the Dario Fo Season has put me in fairly decent shape for directing 3 plays in 6 months, but it’ll be a hell of a theatralathon (that’s my new word).

And why the title? Well, the 3 main plays are dealing with the theme of the future. Specifically relating to a bunch of disillusioned Irish folks in their teens, twenties and thirties. Unless something drastic happens, we won’t be setting the plays in the future with hoverboards and robot dogs (I wish). The title comes from the Morrissey track and it will no doubt be getting an airing (with a bit more from the amazing Mr. Morrissey besides)

We commence work on January 10th and I really can’t wait for it. It’s the biggest project we’ve undertaken in the (near) 5 year history of Devious Theatre and we’re hoping it kicks off our next 5 years with a solid bang. Got to look to the future after all.

I Have Beaver Fever

Yes, I do. Well, not literally, but I think buck toothed wood destroying critters are cute and also… yeah, I’ll leave it there. 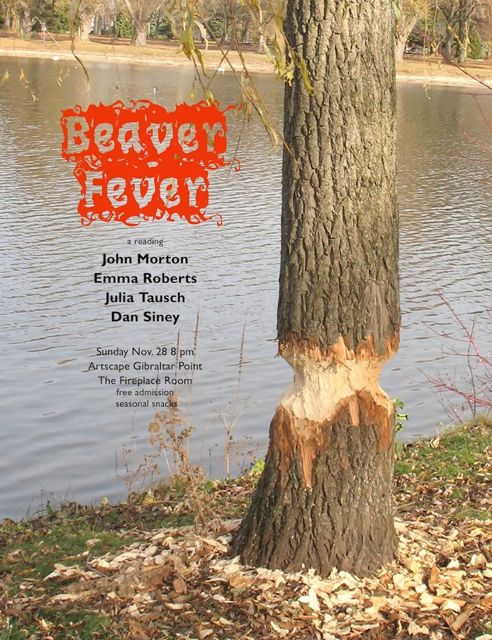 I’m taking part in a reading this coming Sunday with a bunch of other writer’s currently ensconced in the Gibraltar Point Centre for the Arts in Toronto. Along with writers Julia Tausch, Emma Roberts and Dan Siney, I’ll be doing a performance from current work whilst also sitting around a fire, possibly whilst boozing. I am also hoping to have a good solid Christmas jumper for the occasion. The event is called Beaver Fever and should be a good night’s literary chit chat, performance and other bits and bobs.

I’ll be performing/reading from Daffney Molloy And Other Catastrophes which is a small novelette (like an omelette, only a novel) that I wrote quite a while ago but revisited whilst I’ve been here in Toronto. In other form, it was part of a play I wrote called Smitten which I’m also currently dusting off while I’m here. I’ll be doing all the voices and the movements by my lonesome… playing Daffney Molloy is too much fun for a grown man to admit.

So for anyone in and around or near Toronto, the event takes place this Sunday November 28th at 8pm in the Fireplace Room of Artscape Gibraltar Point.

It is also likely that there may be beavers in attendance. Beavers with fever.

A Look At Andersen’s Fairytales

The poster has just been unveiled for Dreamstuff Youth Theatre’s new production Andersen’s Fairytales: The Adventures Of Hans Christian Andersen. The reason I’m writing about it is because I, eh, wrote it. This is my 6th play to write for Dreamstuff, well, 6th on my own if I don’t count the ones I wrote with Mike Kelly, Philip Brennan and Stephen Colfer. I have literally been writing for Dreamstuff since I was 17. Which is a scary, scary realisation. 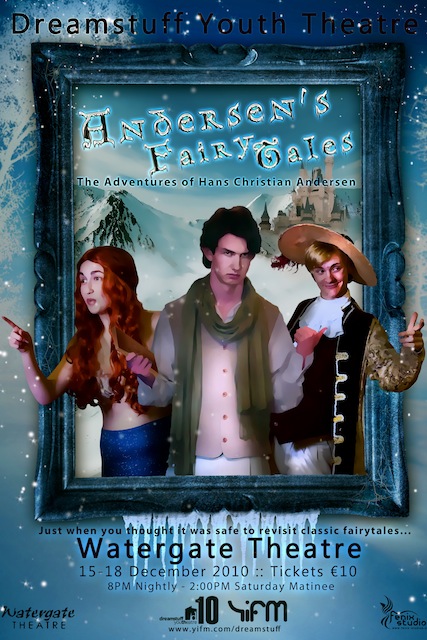 The above photo features Alan Doyle as Hans Christian Andersen, Ruth Phelan as half fish, half girl Ariel and Ben Murphy as the famed ogre hunter Emile Pussenbootz. In the usual Dreamstuff style, it’s got a lot of comedy, often surreal, mostly inappropriate, but I hope, very true to the original fairytales.

I’m a bit of a fairytale obsessive so when Angela Barrett gave me the commission for this year’s play and asked me what I wanted to do, I blurted ‘Andersen’s Fairytales!’ and then excused myself and explained that because we’re in the middle of Dreamstuff 10, the idea of doing a sequel to a past show seemed like a good idea. Luckily, she agreed. They’re currently balls deep in rehearsals for the play and it’s one I’m really excited about. The current Dreamstuff troupe are an amazing bunch of actors, as anyone who saw Dreamstuff 10 will attest to, and I’m looking forward to seeing what they do with all my cheap, crude jokes.

The play is a sequel to another one I wrote, Grimm Fairytales: The Adventures Of The Brothers Grimm, starring Ross Costigan and David Thompson as the titular Grimms. Hence, they have similar posters (and props to Thomas Horvath for this one). Grimm Fairytales appeared in December 2004 (and at the time set a house record for a Dreamstuff show) and six years later we’re going back to the fairytale well. This time there’s obviously a different protagonist and a new story with a whole new cast of fairytale characters. There’s a lot of similarities in both plays, but I assure you, it won’t detract from your enjoyment if you didn’t see a play that ran for a week six years ago. But if you did happen to catch Grimm Fairytales, there’ll be a few surprises you’ll appreciate. Why, maybe even some characters. 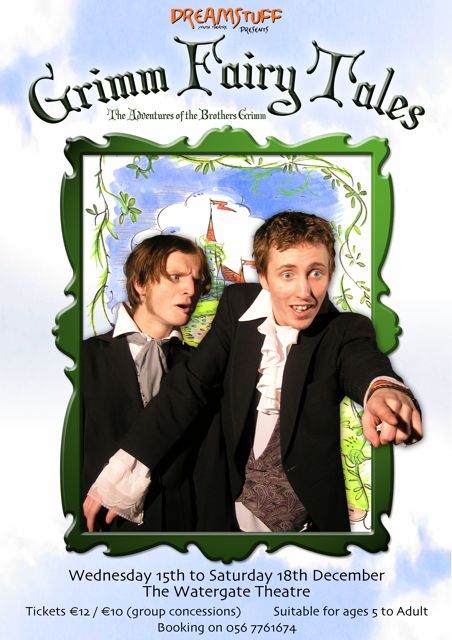 I’ll probably write up something more on Andersen’s Fairytales as it approaches, but please do not let the stigma often attached to youth theatre detract you from attending. This isn’t going to be some cutesie panto. It’s going to a brand new comedy with a really fantastic cast of young comic actors directed by a most brilliant director staged by a company with a proven track record of quality over 10 years. And I’m also pushing this hard because the audience guzzling behemoth that is Scrooge plays the week beforehand. It also played before Grimm’s Fairytales back in 2004 and it didn’t do it any harm so hopefully the omens are good for this one too. Plus, this play actually has snow in it so if the leftover snow from Scrooge keeps getting on the stage it won’t look too odd, as it did in a certain enchanted forest six years ago.

We’ve just released a recap video for Vultures, something we probably should have done quite a while ago. It recaps the storyline from the first 5 episodes leading up to the final two installments:

It also works as an intro to the series for anyone who hasn’t seen it yet. Which is quite a few people. We’re hoping to remedy that by shopping it around a bit before we launch into the next stage of Vultures. What exactly the next stage will be, I’m not too sure yet. But suffice to say, we’re chasing up a few leads… 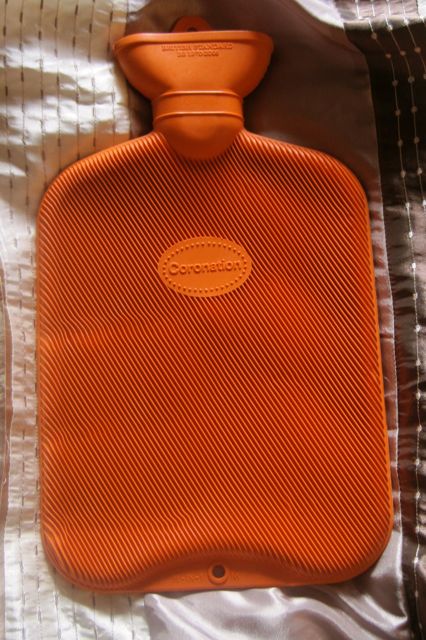 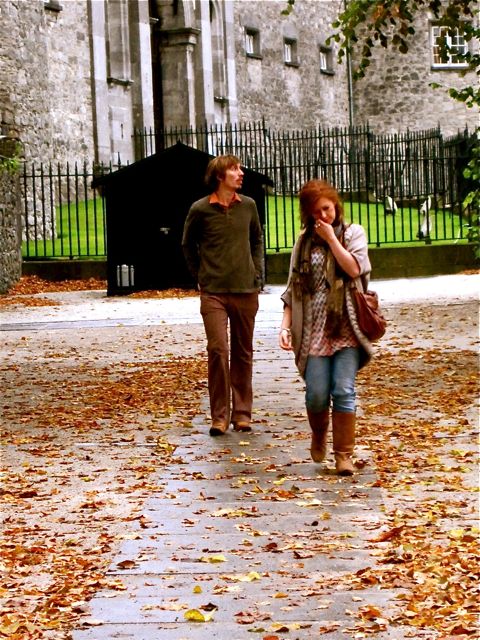 Once Upon A Time In The Glorious Revolution

A short film I worked on last year, entitled Once Upon A Time In The Glorious Revolution, has just gone up on Youtube in a new re-edited form following it’s festival rounds this year. It’s written and directed by filmmaker Sean Clancy and it’s a fine slice of moody, Irish western action. Have a look and a check of it, below.

The Thanes Of Pain Will Shit On You

There’s nothing better than that indescribable feeling you get when something you’ve written is brought to life. In this case I could probably best describe it as dirty and manky. 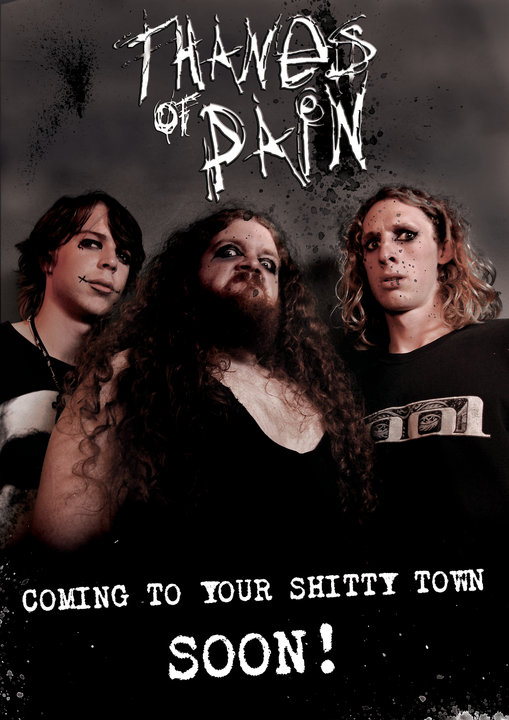 This is the first look at Thanes Of Pain, one of the main adversaries of the titular heroes The Usurpers, the new feature from YIFM. The film is a shit and blood stained battle of the bands version of that old chestnut, Macbeth.

Front and centre is lead singer Pete Mastodon played by Jack O’Leary with Cain Lynch and Paddy Corr as Ned Knobrot and Kurt Dangleberry. A fine job by David Galster.

The film is due to wrap this week and I’ll probably write something a bit more informative then.

Between September 2009 and March 2010 I spent pretty much all my spare (and often full) time working on Devious Theatre’s Dario Fo Season which saw two of the most famous works by the great Italian playwright performed in Set Theatre, Kilkenny. 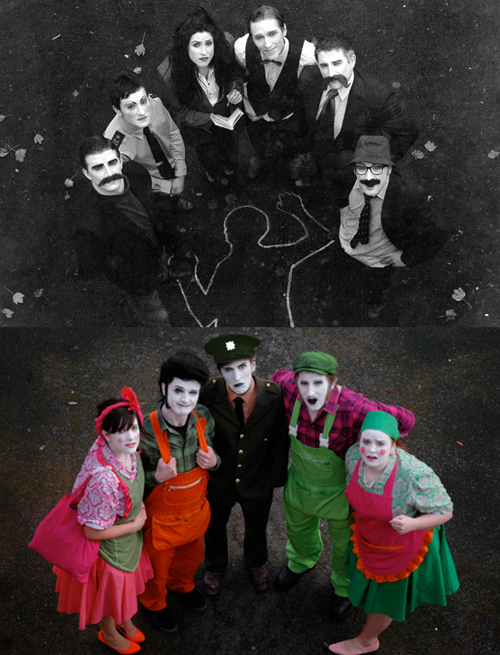 I directed both Accidental Death Of An Anarchist and Can’t Pay? Won’t Pay! and it was definitely a high point in the 10 or so years I’ve spent doing this theatre lark. The reviews were lovely, the audiences were great and best of all, I got to work with a superb cast and crew on two plays by one of my absolute favourite playwrights. Happy out. We did a fairly comprehensive rundown on the entire season which can be read here. It’s taken me a while to get around to posting this but here it is. It’s a video compilation of some bits and pieces from both shows. Enjoy!

All the bits we fucked up from ‘The Mystery Of The Night Time Refuse’ have just gone online.

And there’s quite a few of them it must be said.

The bloopers from the second episode of Vultures ‘The Scarlet Lady Vanishes’ have just gone online. There’s not an awful lot of them but here’s what we cobbled together. As always, gratuitous corpsing.