The Mystery Of The Night Time Refuse

After a long night in the studio finishing the sound mix, Vultures Episode 3 ‘The Mystery Of The Night Time Refuse‘ is pretty much done, bar the few teensy bits of tidy ups here and there. 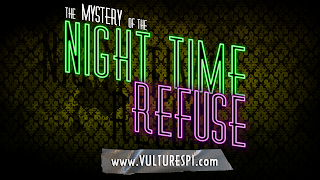 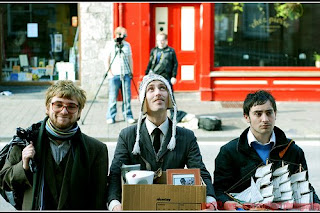 I’m quite proud of it I have to admit. I guess the overall ojective with this episode was to show people that we were getting better technically, that there was a long term story plan in place (aka not making this shit up as we go along) and that we could deliver consistent laughs with a solid story and interesting characters. And I think on those terms, we’ve succeeded. There are obviously going to be qualms. And I got plenty of them! Which is par for the course when you have a budget that comes in under 200EURO! Considering the scope and ambition and sheer naivety we had going into this project I’d still really love to see what we could achieve with substantial funding. But hey, that’s a story for another day.

As it is, we’ve got a lot of people working really hard on this project and everyone is so damn dedicated. Which really is the heartening thing, when you’ve got actors and crew who not only enjoy working on a project but actively look forward to it. And hey, they’re doing it all for free too! 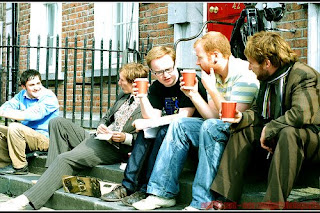 So yes, Vultures is definitely a labour of love and without doubt the biggest creative undertaking I’ve ever taken on in my life. And at the end, if I can stand proudly by 6 episodes of something that, with my friends and allies, had blood, sweat and tears poured into it, then yup, I’ll be a very satisfied mind indeed.

As it is, we don’t know how this episode is going to be received, we don’t know if more people will be attracted to the project, we don’t know if it will work. All we can do is have faith and plug on regardless. Episode 4 is currently filming and it’s been going great guns so far. So all we gotta do is keeping working hard (for free, yes) and try and somehow find the time to finish off Vultures in 2009. Fingers crossed. 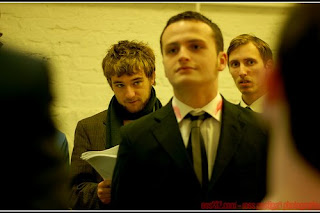 We’re trying to use the trendy buzz phrase ‘webcom’ as much as possible too. Use it! Use it! It’s great and it’s trendy. And also, we’re sick of people saying ‘Oh, isn’t a sitcom supposed to be just half an hour?’ and we’ll get flustered and make lame excuses. But now, now we’ve got an answer and it’s this: ‘Webcoms are 40 minutes stupid!’. That’ll put the shoe on the other foot.

Episode 5 & 6 are currently undergoing their drafting process. It’s weird having planned a story arc for nearly 2 years to finally see it coming into shape. It’s making me and Paddy feel kind of JK Rowling-ish. And yes, everybody dies. And there’s a bit with a house elf.

All I’ll say is this, we couldn’t have picked a better time in Irish history for our long planned storyline to fall. If it gets labelled ‘The Recession Sitcom’ then I’ll be a happy man.

All photos here are by Ross Costigan of www.oss237.com and the title card was designed by Paddy Dunne who really should have his own website but just doesn’t.

Previous Story:
Welcome To Bansheeville
Next Story:
Blade or Blouse… something like that.