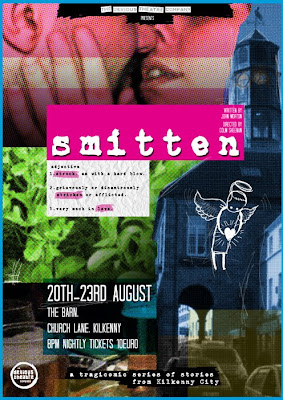 Smitten was the last play I wrote and it was performed Augst 20th – 23rd in The Barn, Church Lane, Kilkenny. I was happy with how it went but undoubtedly an absolute bag of angsty nerves. It was a weird process in terms of the writing and development of the play but in the end, the crowd seemed to enjoy it so I guess that’s what counts. I didn’t blog as heavy on this one as I did on Trainspotting (Possibly because I was up to my eyeballs). But anyways, here are my before and after blogs from the week of the show, along with some choice pictures from the production.

BEFORE: Smitten – A Play From Kilkenny

It’s a little bit weird being at this stage of any kind of creative endeavour. The stage where you’ve really worked so long on something and it’s just about to be presented to people and you’re not really sure if its ready or indeed, if it’s much cop. Well, I’m at that stage now with Smitten. I could probably spend years working on it and we would probably love another few weeks of rehearsals but that’s always the way and really, beside the point. It’s opening this week and it’s going to be seen and I hope people like it and it’s all very much out of my hands. 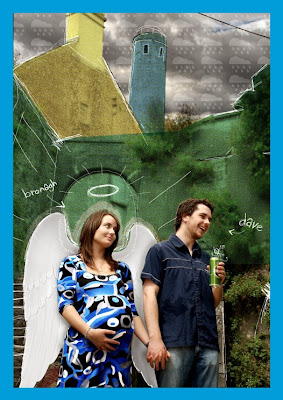 Smitten is a story (or stories) that I’ve had, quite aimlessly, in my head for years and years. Initially, I just wanted to set something specifically in Kilkenny. It’s my hometown and I’ve lived with the place for so long that I just had this desire to put something to paper about the place because I’d love to read stuff set in Kilkenny myself. So, I had all these little stories and they were all random, often interlinked but mostly self contained. And they were all set in Kilkenny. Odd stuff like a story about a lovelorn waitress who had a heart she couldn’t keep in her chest and used to have to chase it all around the place. Or this character who used to turn to ice at the most awkward moments and break into tiny pieces. And there was a guy who could literally read peoples faces and a comedy story set at a funeral and there was a really awkward drug deal that went horribly wrong and all these other bits and pieces of assorted story bric-a-brac. And a lot of the stuff that found its way into the play was there too like angels and sock puppets and the grand romantic gestures. And thematically, really, it was all about being in your 20’s and the preoccupations you have at that time of your life. And of course, these were preoccupations that I had myself so I really wanted to express them in a story. I’d heard this phrase ‘Your teens are your body’s puberty but your twenties are your minds’ and it really summed up what I wanted to jot down. At first it was a novel but at this stage I’m a little too undisciplined to write a novel so I began working on this 90 minute screenplay. Not that I thought it would be a particularly good film but rather because I just wanted to get the fucking thing down on paper and try and batter out some sort of shape to it.

Then after Heart Shaped Vinyl (my first play, churned out in a month and thrown onstage before the umbilical cord could be cut) I had a bit more confidence about what went into writing a play. There was no pressure on me to write another and there was no particular need for me to do so but Smitten just jumped to mind. I had a fear that I’d have this story about the choices you face in your 20’s and that by the time I got around to executing it in any form I’d suddenly be in my 30’s. And as books and films are infinitely more ambitious ventures, I figured I’d try and adapt Smitten into a play. And that’s what I’ve spent the past year doing. 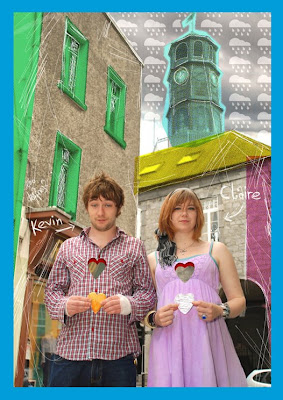 I tried to mould it into some decent structure and then tried to implement all the various surreal elements I wanted to put into it. In its story and script form I had a disparate selection of dream sequences and dance sequences and singing sequences and heavy doses of magic realism all this other shit I could indulge in because I was just writing for myself, right? But with an audience in mind I felt I had to jettison a lot of the outlandish elements of the stories and really focus on telling a few stories well. So that’s what I’ve tried to do and I hope it works out. It’s been a long process and a tough process and really, I’d love more time with it but yup, out of my hands. I’ve spent countless times annoying the actors and Colm with changes throughout the rehearsal process but I think I could just stay tinkering at something for fucking ages. Even up to the first week of our rehearsal period there was one story about this suicidal girl who hovered above the Canal Walk and I really liked elements of it but it was an awkward fit so I cut it. I think the reason I liked it was because it wasn’t intertwined into the story of a relationship. I guess that’s the one thing I don’t like about Smitten, that it’s too couple heavy. So instead of being about an assortment of 20 something’s, it becomes about an assortment of 20 something couples. But those couple stories do seem to commentate on choices you have to make in your 20’s so yeah, all the lovey dovey stuff might just have a point. 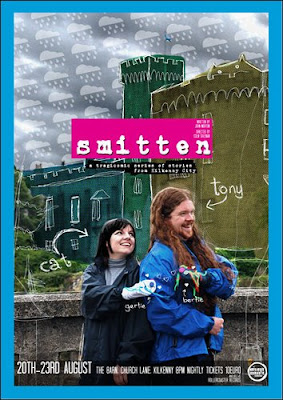 Despite constant nervousness and worry, I’ve really enjoyed the rehearsal period on this one and after our initial casting difficulties, it’s been really fun. It really is an awesome cast, they’re fucking brilliant, every one of them. Toppers they are. The words really flow out like rain onto a Kilkenny street and they make it sound a lot better than I could have hoped for. Our committee and crew have really worked hard on this one. Initially, after how well Trainspotting went we were worried that we wouldn’t be able to muster the energy for another play and that we’d end up fucking up our momentum by burning ourselves out. Well, if burn out is in the post, it hasn’t arrived yet. I think it’s that nervousness about topping Trainspotting and also having to live up to the plaudits we got for it that’s made us up our A game considerably. So myself, Niamh, Ken, Kevin, Ross, Paddy and Colm have spent ample time sitting in The Field drinking stupid amounts of tea and deliberating over every minute detail of this production. I’m very proud of the work we do and if this play bombs and goes up in a big heap of smoke, I’m happy choking on it in the knowledge that we’ve tried our best. 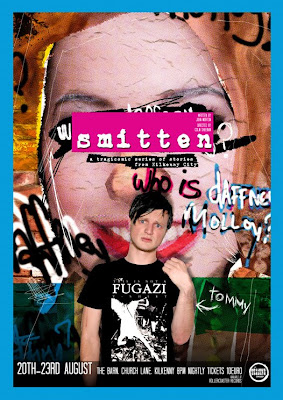 Also, we wouldn’t have been able to do this play without Barnstorm Theatre Company’s assistance. They’ve supported it all the way and given us their time, space and professionalism, all for the love of local theatre. And for that, they must be commended. We’d be at nothing without support and with them we’ve had it in bucket loads. If you haven’t had the pleasure of being in The Barn before, oh you wait and see. Plus Eddie has some killer set design plans in place. It’s going to be something else. And David Sheenan, aka Supernova Scotia, has contributed a fucking awesome score for the play which makes it seem really unique. So yeah, it’s gonna look and sound great at least! 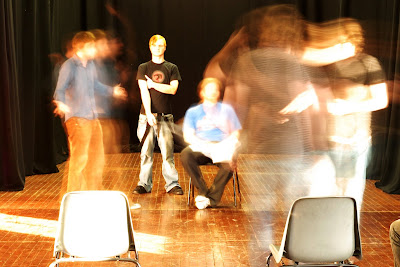 I also have to state that Colm Sheenan, our director, has been fantastic. He’s really busted his ass on the play and has never given up on it. He’s always brimful of direction, suggestions and chair movements. And he’s always good enough to step back when the actors want to try something out or when I invariably fret and worry about a scene and keep thinking of changing stuff. I really hope the finished product does his work justice. 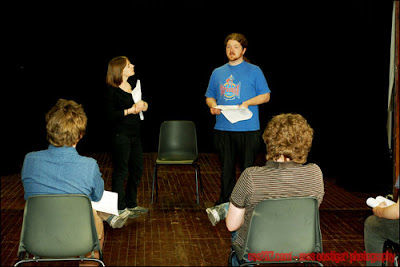 And it’s that finished work that goes onstage this Wednesday. Is it finished? Well, for now it is. But I always think I might go back to that book or that film script again. And for no other reason in my mind than there’s a lot of stories in Kilkenny and they’re well worth telling. It’s a hell of a place. Despite all the rain. 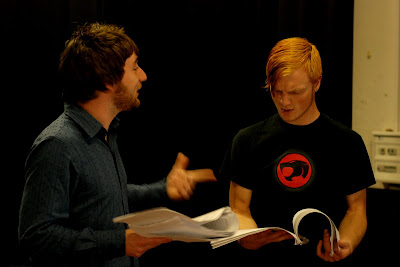 AFTER: Struck As With Harsh Blow – Smitten Closes 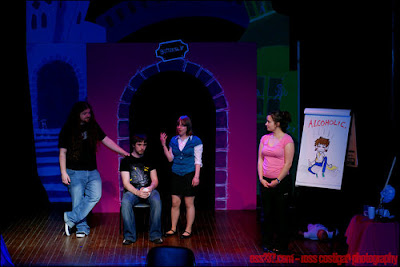 After a 4 night sell out run we’re all a little shell shocked. Struck as with hard blow for absolute sure. We weren’t expecting the demand for our production of Smitten to be as it was. But it certainly was. The entire run had been pretty much booked out by Thursday afternoon. Any remaining awry comps were contested and SOLD OUT signs (as below) were quickly drawn up by a big red marker. All the while we stood by quite amazed. This show was a bit of a leap of faith for us. We termed it an experiment certainly. For a fledgling company to do a brand new untested play 6 weeks after a massive large scale production in a space that most people hadn’t heard of or struggled to find with a severely depleted roster of actors and resources was an ask. But it was worth every second. I was so proud of everyones hard work and what was achieved. The fact that 4 nights of a sell out produced consistent laughs and smiling faces was enough for me. Relief too! I could see where the play worked and where it didn’t but with an audience it breathed, and I’m glad it came to life. It went a bit too long and a few tech glitches hiccuped us but mostly it was a production that showed the hard slog that had been put into it. With all my initial worries and nerves calmed, I’ll now happily go back to the lab and tinker away. 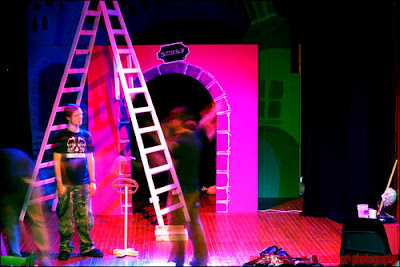 So, solid props to the director Colm Sheenan for his tireless work on the project. To our awesome set, prop and lighting designers Eddie Brennan, Thom Dowling and Gerry Taylor. To everyone at Barnstorm Theatre Company for letting us into their home and stealing their milk for the week. To the hard grafting committee of Devious Theatre, Ken, Paddy, Niamh, Ross and Kev. 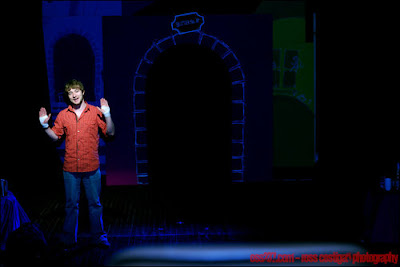 And finally to the amazing cast who really gave it socks and gave the audiences some fine performances. They were a joy in every single way and to revive the show just to work with them again would be worth it alone. They were Stephen Colfer, Ross Costigan, Amy Dunne, Ken McGuire, Kevin Mooney, Lynsey Moran, Niamh Moroney, Maria Murray, Suzanne O’Brien, Jack O’Leary, Annette O’Shea and Geoff Warner Clayton.And that’s that. Us Devious bods must rest ourselves before the next production begins. Until October…

Previous Story:
The Incident Of The Wrapped Episode
Next Story:
Meet Jack Street and Sarah Black