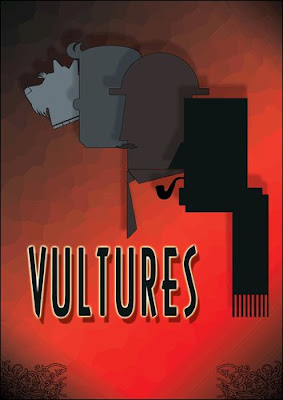 As of yesterday, January 3rd, we began filming Vultures Episode 5 and Episode 6, back to back. Like the way proper sitcoms are usually done! The shoot is going on throughout January and February, with a lot of actors and a lot of scenes and a lot of tea powered work to be done. I’ve bought thermals, I’m clearing the evil demon of alcohol from body (for a while at least) and I bought a new multi nib pen and plastic folders. I am fucking ready!

I’m not at liberty to mention anything about the details of our low budget webcom shoot. But all I will say is that we’ve got a brand new updated crew on board, a rather large and varied cast of characters and that direction duties are being concurrently handled by myself (“Uh, I think you need a longer pause”) and the currently one armed but ever resilient Ross Costigan (“Uh, that needs to be reframed…wait, yeah, that’s it”). So on we march! More updates and info as we have them. We’re still in the edit for ‘The Case Of The Poisoned Dates’ so expect some sort of date for that to materialise for that soon. Here’s me and Dave and Suzanne using our acting in it: 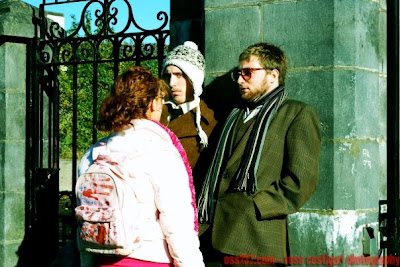 A happy new year to all!

My resolutions are pretty much:

1. Finish Vultures.
2. Get Vultures out there. Where, I don’t know.
3. Finish Bansheeville. Needs more banshees.
4. Not write any more plays or low budget web sitcoms for a long, long time.
5. Take a holiday.
6. Finally get the time to use the car I bought back in 2007.
7. Eat more things with green in them.
8. Watch a lot more plays. And films. And read things.
9. I’d like to learn some sort of new and practical dance.
10. Save enough money to send me to South Africa in 2010. I’m also going to tie this resolution into having an excuse to go to South Africa in 2010.

Back to the grindstone.