Vulturespotting: Start Magazine write us up.

Start Magazine, the Arts magazine for the South East did some nice coverage of Devious Theatre and Mycrofilms in their Autumn issue. First up is an interview with Paddy Dunne, co- writer of Vukltures on the gestation of the sitcom and our intentions. And secondly is a published review of Devious Theatre’s recent production of Trainspotting. It’s a real pretty looking magazine. 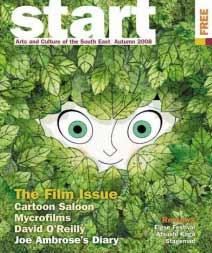 It seems that more and more of the general public are rejecting television for its lack of interesting and creative programming, and are turning on to the World Wide Web. There are specific websites that are able to cater to people in society that do not wish to be versed in Fair City or Coronation Street. Folks looking for intelligent and dexterous entertainment seem to get there fill from the internet, and this is where the clever work of three Kilkenny locals exhibit their talents, with the web-based sitcom ‘Vultures’.

‘Vultures’ is the flagship programme for Mycrofilms, a production and editing company focused on creating new short films, music videos, animation and features.

Conceived by John Morton and Alan Slattery the company launched in late 2006, and it was soon after in that same year that Morton and friend Paddy Dunne planted the seed for ‘Vultures’, which they spent the next nine months exploring, scrutinizing and story boarding. The filming for the first of six episodes ‘The Kris Kringle Konundrum’, eventually began in Winter 2007.

Collectively written and directed by Dunne and Morton, the series tells the tale of three private detectives who run a minor league private investigation agency in small town Ireland. The moderately successful business is called Vulture Private Investigations and specialises in dealing with small-scale cases like missing pets. The pair work well together. Sharing the duties of directing and writing may cause tensions, however it seems like the Coen brothers it benefits Paddy and John rather than hinder; “because we’re good friends, we are on the same wave length and able to bounce ideas off each other; we share the same vision” ‘Columbo’, ‘Tin Tin’, and ‘Sherlock Holmes’ are among the many fictional detectives that Morton and Dunne drew inspiration from when creating the characters; each persona has distinct qualities that make for fascinating and compulsive entertainment.

The detail in which the pair has gone to in shaping these characters is supported by the acting talents of those involved. Instantly noted upon viewing the two filmed episodes is the standard to which this project is produced. Everything from the script, costume, location and acting is a surprising calibre. Give the small budget. The first episode was produced on the rigorous quota of four hundred euro. It is with a grant from the Kilkenny Arts Office that the team is now able to invest in a bigger scale with the filming of the upcoming episodes.

The chosen medium of internet exposure seemed to be fitting to the direction in which the team behind ‘Vultures’ wishes to pursue; “The web gives us an instant audience while it also showcases our work to prospective investors or television producers.” It would seem that ‘Vultures’ is aiming for a larger market and those involved hope to someday gain exposure on national television.

Filming for the third episode began this summer, but Paddy is insistent on having no strict deadline for the online launch; “it’s better to take your time and produce a higher level of work, rather than pushing for something without it being polished. Because sometimes, just sometimes, Irish films don’t need to be about men chasing cows around fields to fiddle music.” With this as a slogan you can see that not only do these gentleman have a sense of humour they also have something to prove to the Irish production world.

The following review was first published in the autumn 2008 edition of Start Magazine, the arts magazine for the South East of Ireland. Written by Ita Morrissey, the review can be found in the magazine available here as a free download.

For folks that are unacquainted with ‘Trainspotting’ performed by Devious Theatre (Watergate, Kilkenny, June), it’s the tale of a dark and dirty Edinburgh told through the lives of five down and out drug riddled friends.

The risky aspect in taking on a production such as ‘Trainspotting’ is the subject matter it confronts; take the infamous toilet scene when Renton retrieves his pills, Alison’s re-enactment of spoiling food when she worked as a waitress and then there is all the business with needles.

It was apparent that this troupe of actors had worked hard to achieve a naturalistic Scottish accent; the dialogue was delivered in a superior manner by many of the cast. Ross Costigan, who played Renton, was able to juggle the accent with volume to a perfect level, but at times Begbie, played by Niall Sheehy, went beyond what could be deciphered. And occasionally the vocal abilities of the one or two of female actors were testing on the audience. That only being a minor note compared to the standard reached by all the others.

The first half ran at a great pace, as Renton was used to marvellous effect guiding the audience along his life of drugs and hard times. Costigan’s skill at portraying this down beaten but lovable character was magnificent; he lived and breathed him.

It was slightly disappointing then, not have the same connection with him in the second half. That being said, there were some beautiful moves throughout the play, especially in two specific scenes where Sick Boy (John Morton) tangoed with Mother Superior (Paul Young) in a junkie frenzy and where Spud reveals his dirty sheets across the breakfast table.

This type of blocking from directors Niamh Moroney and John Morton only contributed to the professional standard of this production.

Here’s a picture of Ross, Niamh and myself looking all happy because people are saying nice things about our play. 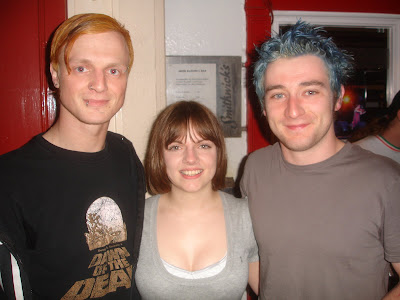 Previous Story:
Vultures Episode 3 is go go go!
Next Story:
The Incident Of The Wrapped Episode