I’ve just finished work on the first draft of Bansheeville, the first play I’ve been commissioned to write.

I started work on it back in June and it’s been a great experience, especially when you’re working within the parameters of deadlines and being able to get top notch professional feedback too. Priceless learning curve. 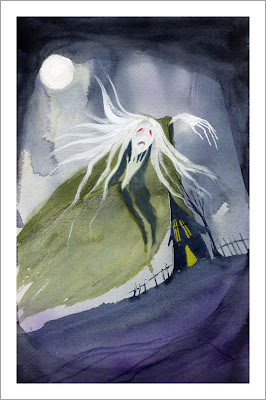 After Heart Shaped Vinyl and Smitten, I was a bit nervous that my third play was a children’s play and would I be able to write something that wasn’t monologue heavy and full of foul language? But yeah, I think getting out of any comfort zones I had started to get into as a writer was the best thing for me at this stage of my writing life. Children are a very specific audience, not to mention a demanding one, so you really need to make sure that you’re telling a really good story that they can connect with. It didn’t take me long to realise that having written for Dreamstuff Youth Theatre for so long and worked as an actor with Barnstorm Theatre Company had given me such good experience in terms of seeing what works for younger audiences and I was able to apply this to Bansheeville.

I’ve had ideas for a banshee centred story for a long time and I never knew which form it would take but I think a children’s play is the ideal way to tell it. I’ve always had this weird slightly morbid obsession with banshees ever since I was a child. It started with all those old stories you hear, grandmothers stories about these old Irish myths and the banshee was the one that really stuck in my little head. The idea of this horrible, screaming wailing woman hanging outside windows and warning people that they’re gonig to die, is terrifying and as a child you just get entirely freaked out about what could be outside your window at night. Then I got really obsessed with that Disney movie Darby O’Gill and The Little People when I was young because it was full of leprechauns and Irish mythology and it had this flying, wailing banshee in it. Looking at it now, the banshee looks really dodgy with really lame special effects but as a child it just shits you up. The film also features a really young pre-Bond Sean Connery with a dodgy Irish accent and even dodgier singing skills. You really should check it out. For the laugh anyway.

So yeah, this is the banshee story I always wanted to write. It’s about a 13 year old banshee called Siona and she hasn’t found her scream yet and her hair is too knotty to comb and she lives in a colourful little place called Bansheeville. But even though she can’t scream she’s forced up into the big bad world because there’s a shortage of banshees in Ireland due to the War of Independence. So with her little comb and list of Wailees, she’s sent out to go and herald death. Which is obviously going to be hard when you can’t scream.

So yeah, the perfect ingredients for a cracking childrens yarn: Death, banshees and the Irish War of Independence.

But to be honest, I think they were the elements that got it commissioned. Because I think people always underestimate children’s capacity for subversive material and something like this could potentially connect…either that or I’m spreading my banshee terror to a whole new generation. I’m trying to make it as much of a fairytale as possible because fairytales are such an effective way for a child to be introduced to adult themes like death and sex and growing up and being responsible. Subversive see? So yeah, my inspirations for this are the works of The Brothers Grimm, Angela Carter and Terry Gilliam. So I’m hoping it’ll be a nice funny, dark little fable for children. And maybe one day it’ll make it up onto a stage. Early days yet anyway. But this is the first stage of the process completed and I’m really hoping to keep moving on with it.

And if you ever see a comb lying on the ground, do not pick it up.

Previous Story:
The pen is down on Vultures Episode 4.
Next Story:
The Mystery Of The Night Time Refuse